BANDITROOMQUALITY MAGAZINE WITH VARIOUS CONTENT
HomeNEWSChelsea boosted as Serie A club would be ‘willing to sell’ €40m...
NEWSSPORTS 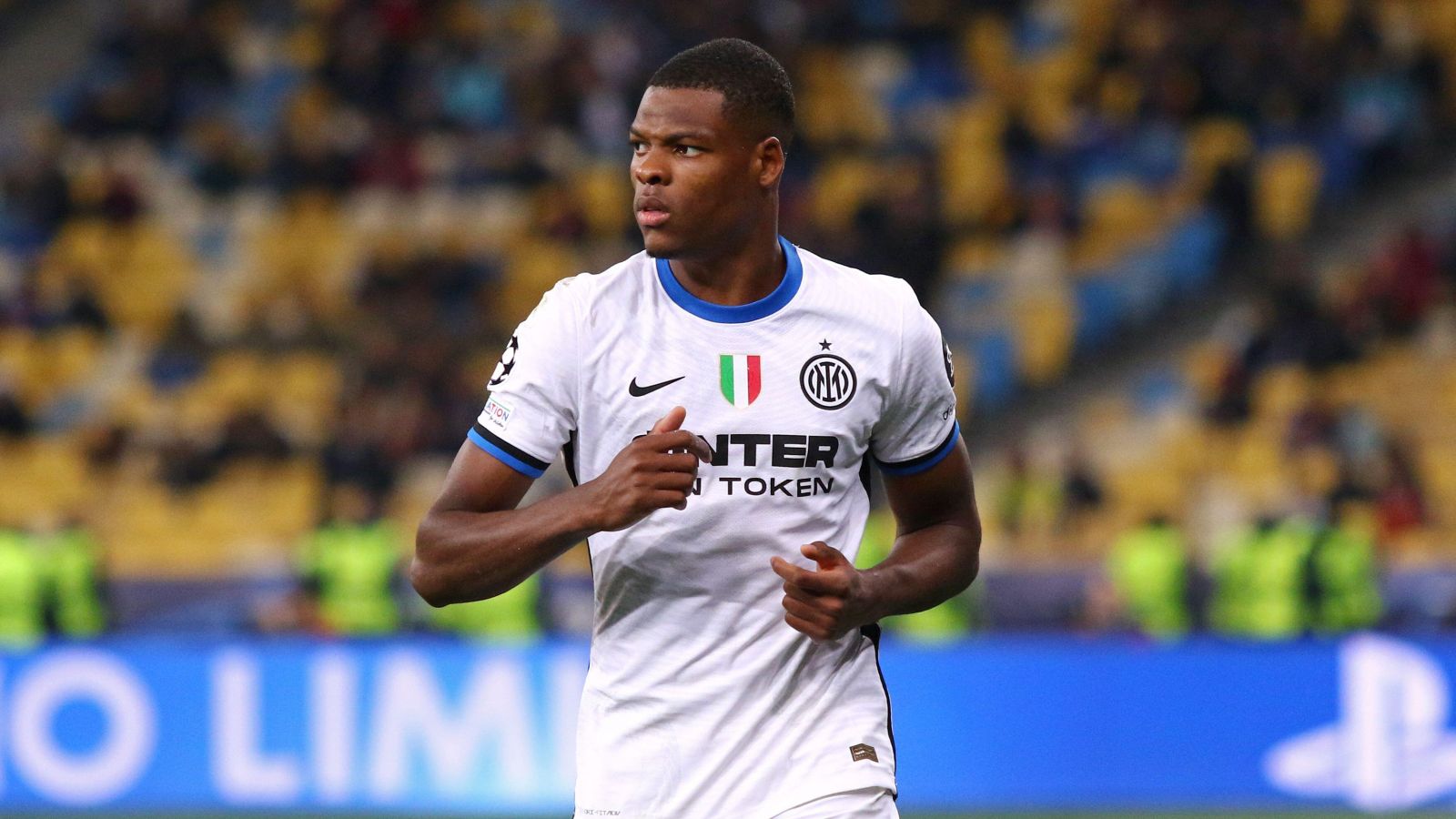 Inter Milan would reportedly be ‘willing to sell’ their full-back Denzel Dumfries this summer amid interest from Chelsea and Manchester United.

Dumfries’ reputation has grown ten-fold over the past couple of seasons. He was a mainstay for PSV for over three years up until the end of the 2020/21 campaign.

The powerful right-back went onto shine for the Netherlands at the delayed European Championships last summer.
The 26-year-old was linked with Everton last summer, though he ended up making the move to Inter Milan. Given how Everton’s season panned out, this proved to be a wise decision.

Dumfries showed how dangerous he can be going forward as he was able to grab five goals and four assists for Inter Milan in Serie A.

Despite this, according to CalcioMercato (via Sport Witness), the Italian side do not consider Dumfries to be ‘unsellable’.

The report claims that Chelsea have ‘set their sights’ on Dumfries this summer, while Man Utd are also keen to sign him.

Inter Milan would want €40m to sell the Dutchman this summer after they splashed out €15m to bring him in last year.

If Chelsea are able to seal the signing, Thomas Tuchel may start to play current right wing-back Reece James as a right centre-back as part of his favoured 3-4-3 formation.

The Blues and Man Utd are also understood to be battling for Frenkie de Jong’s services.

The fight for his signature has already dragged on far too long, though it does not appear to be getting any closer to concluding.

United have agreed a €75m fee with Barcelona to sign De Jong, but mixed reports have emerged regarding his desire to move to Manchester.

This seems to have alerted Tuchel’s side. If Spanish outlet Sport are to be believed, De Jong ‘would only agree to leave if it is for Chelsea’.

The Blues have their own problems as they ‘do not pay as much’ as United are planning to for De Jong. So strap yourselves in for some deadline day drama. A deal sheet may be needed for this one.

Chelsea have signed two players so far this summer following Todd Boehly’s takeover. Around £85m has been spent to sign Raheem Sterling and Kalidou Koulibaly from Man City and Napoli respectively.

Frenkie de Jong is still against a move to Manchester United, and according to reports in Spain, he has told his Barcelona teammates that he is definitely staying put.

Unless you have been living under a rock, you’ll know that Manchester United have made De Jong their top target this summer.

Barcelona’s financial situation has been highly documented and the Dutch midfielder has been identified as someone who can help balance the books.

His hefty wages, on top of his high sell-on value, have made him a desirable player to offload.

And United are more than happy to meet the Blauragana’s valuation, and after weeks of negotiations between the two clubs, eventually had a £63million bid accepted.

United will likely meet his wage demands, but money could still be the main reason that the former Ajax man decides to stay at the Nou Camp.

Barcelona reportedly owe De Jong £14m to £17m in deferred wages after he took a temporary pay cut amidst the Coronavirus pandemic.

Unsurprisingly, the 25-year-old will not leave until he is given the money is rightly due.

De Jong will likely be very stubborn and quite rightly so given the fact he has sat back and watched the La Liga club spend nearly £100m on Raphinha and Robert Lewandowski while he is owed a crazy amount of money.

Barcelona have reportedly given the player two options: leave, or take a salary reduction.

Apparently honouring the contract they gave him and paying him back those deferred wages is not an option. Maybe Frenkie should take Gary Neville’s advice.

The Express describe this as a ‘new twist’ in a saga that has suffered from around one million twists already.

In order to balance the books, Barca have identified goalkeeper Marc-Andre ter Stegen as an alternative player who can leave, the report adds.

They are also close to confirming the signing of Jules Kounde, who they have stolen from under Chelsea’s noses, becoming the second player – after Raphinha – to snub Stamford Bridge in favour of the Nou Camp.