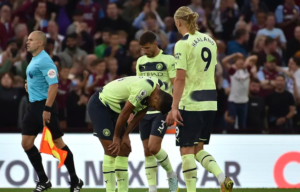 Erling Haaland’s 10th goal in just six games but it wasn’t enough to give Manchester City victory over Aston Villa.

The 22-year-old striker continued his remarkable start to life in the Premier League with another strike in the midlands, as Villa boss Steven Gerrard couldn’t seem to ease the increasing pressure on his position. But his side responded in emphatic fashion, as Leon Bailey equalised in the 74th minute with a ferocious finish.

City took shortly the lead after half-time, stepping up a gear by suffocating the opposition defence once again. Haaland, who scored a hat-trick only three days ago to reach nine league goals, profited from a typically inch-perfect Kevin De Bruyne cross. That seemed like all Pep Guardiola and co needed to do, but a belter from Bailey levelled the scores late on and offered Gerrard some salvation.

Manchester City failed to move atop the Premier League standings after being held to a 1-1 draw by Aston Villa on Saturday.

With league leaders Arsenal set to face Manchester United at Old Trafford on Sunday, Pep Guardiola’s men knew that three points would be enough to leapfrog the Gunners in the standings.

That looked to be in the cards when Erling Haaland continued his magnificent goalscoring run.

After a goalless first half, the Norwegian was in the right place at the right time and volleyed home Kevin de Bruyne’s cross at the back post after 50 minutes.

He nearly added to that tally, only for Aston Villa goalkeeper Emiliano Martinez to deny him on two seperate occasions.

De Bruyne later hit the crossbar from a free kick, and City’s inability to put the match away proved costly.

Jacob Ramsey’s squared pass for Leon Bailey was struck home first-time by the Jamaican international in the 74th minute, much to the relief of the under pressure Steven Gerrard.

Villa thought they had taken the lead in the closing staged when Philippe Coutinho fired home off the underside of the bar, only for the goal to be correctly called off for offside.

In the end the two teams settled for a share of the points, with the result bringing an end to Villa’s run of three straight defeats, while moving City to within one point of Arsenal.

Bailey met a low cross from Jacob Ramsey and hammered a first-time shot high into the net in the 74th to rescue a valuable point for Villa, whose manager Steven Gerrard was under heavy pressure after three straight league losses. For City, it’s a second draw to go with four wins in the opening six games, leaving it tied for second place with Tottenham on points.

Leader Arsenal has a chance to go four points clear on Sunday if it can maintain its perfect record when it travels to Manchester United. Pep Guardiola’s City has made a habit of going two goals down before rallying, but this time it was their tun to relinquish the lead.

Haaland had been quiet in the first half but showed his predatory instincts when he came flying in at the far post to meet a pinpoint cross from De Bruyne, jumping high to side-foot the ball in. The towering Norway striker forced two good saves from Emiliano Martinez as City pushed for a second goal. That left the visitors open to counterattacks, though, and Ramsey had already squandered one such opportunity with a heavy touch by the time he set up Bailey for the equalizer.

Haaland and Mings thrash it out

In a divison filled with diminutive footballers, it’s rather refreshing to see two brutes going at it in the penalty box. When Erling Haaland and Tyrone Mings were both confirmed to be starting, traditionalists would’ve hoped that a proper battle was in store.

And while they didn’t deliver the kind of colossal clash football fans often like to see, the pair did lock horns towards the end of the first half. Firstly, Haaland smashed into Mings as the ball rolled out of play before the Aston Villa defender returned the courtesy, throwing the City striker to the ground in the next phase. It was all deemed fair, though, and the duo saw the funny side afterwards.

Come on, admit it. You were one of those foolish enough to think Erling Haaland wouldn’t have scored 10 Premier League goals in his first six games. Joking aside, the 22-year-old Norwegian marksman is on a mission to break records in his first season as a Manchester City player, and tear apart defences.

With help from a sublime Kevin De Bruyne cross and in midair, Haaland volleyed home in the 50th minute to give the Citizens a deserved lead and take his tally into double figures just three days in September. His finish wasn’t anything special, but it was clinical and what we should expect for the rest of his time in English football. We’re already running out of superlatives for him.