BANDITROOMQUALITY MAGAZINE WITH VARIOUS CONTENT
HomeNEWSErling Haaland's records - and the ones he could break as Man...
NEWSSPORTS 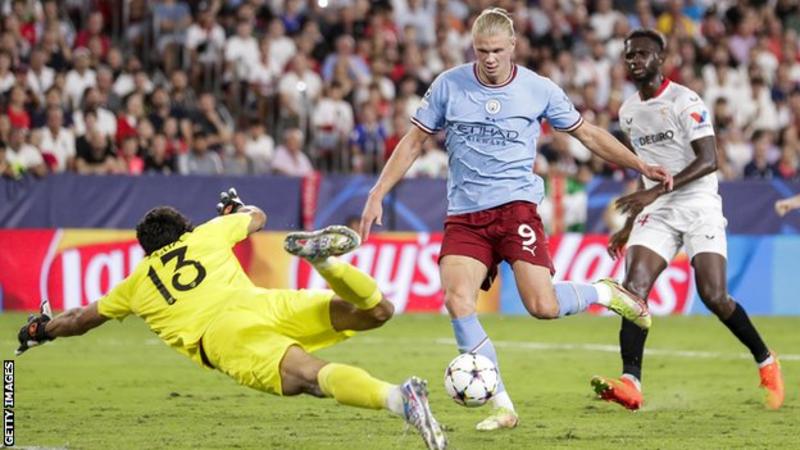 Erling Haaland prepares for his first derby against Manchester United on Sunday – after a record-breaking start at Manchester City.

Haaland seemingly breaks records every time he steps on the pitch for City, with 14 goals in his first 10 games before the international break.

So what landmarks has the Norwegian 22-year-old, who is already on his fifth club, already achieved and what else is possible this season? BBC Sport takes a look.

His nine goals in his first five games were also a record – and made him the top scorer in August of any Premier League season.

Haaland is the first player to score in his first four away games in the Premier League.

He also broke a few records on his Champions League debut at Sevilla, with a double in a 4-0 win, and more with the late winner against his old side Dortmund.

Haaland became the first player to score multiple times on his Champions League debut for three different clubs – after a hat-trick for Salzburg against Genk and two goals for Dortmund against Paris St-Germain.

That took him to 25 Champions League goals in just 20 games – smashing the old record of Ruud van Nistelrooy and Roberto Soldado, who scored 16 in their first 20 games.

He is the youngest player to score 25 goals in the competition, beating the record of Kylian Mbappe, who in turn took the landmark off Lionel Messi.

His goal against Dortmund took him to 26 goals in 21 games.

He has already equalled the record for most goals in his first 30 Champions League games – with nine games left to score once and break Van Nistelrooy’s record.

Haaland also has the record for fewest Champions League games needed to score 10, 15 and 20 goals. Nobody else has scored multiple goals in four successive appearances in the competition.

He is also the first City player to score on both his Premier League debut and Champions League debut for the club.

Haaland’s previous goalscoring records
He had an even better start to his time in Germany. Haaland is the only player to score on his Dortmund debuts in the Bundesliga, German Cup and Champions League (as well as scoring in the German Super Cup).

He was the first player to hit a hat-trick on his Bundesliga debut as a substitute (coming on after 56 minutes at Augsburg).

He holds the record for most goals in his first two, three, five and six Bundesliga games games (five, seven, eight and nine goals respectively).

He took 50 games to score his first 50 Bundesliga goals, also a record – and, at 21, was the youngest player to score so many.

Haaland is the youngest player to score four times in a Bundesliga game (20 years and 123 days, against Hertha Berlin).

He barely stuck round long enough at his first three clubs to set many records – barring several Champions League landmarks with Salzburg.

International record? Yes, he has one of them too. His nine goals in one game against Honduras in 2019 remains a record for a Fifa Under-20 World Cup match.

He has netted 21 goals in 23 games for Norway’s senior team.

What records can he break?
Haaland could smash the record for Premier League goals in a season if he carries on like this.

The record is 34 – by Andy Cole in 1993-94 and Alan Shearer the following season. But that was when there were 42 league games.

Haaland ‘only’ needs 24 goals in his next 31 games to beat that.

He might find it tough to match the record for the top-five European leagues – Lionel Messi’s sensational 50 goals in the 2011-12 La Liga.

Nobody has won the Premier League Golden Boot with a record of a goal a game or better. Harry Kane was closest with 29 goals in 30 games in 2016-17.

Haaland’s current rate of scoring in the English top flight would see him end on 60 goals.

Tommy Johnson’s 38 goals in 1928-29 remains the City record for a player in one season in all competitions.

The record for Champions League goals in a season might be tougher to come by – with Cristiano Ronaldo netting a remarkable 17 goals in 11 games in 2013-14.

So what other records could he break this season?

The most goals scored by a player in a calendar month was Luis Suarez in December 2013. Haaland was only one goal off that mark in August but he has a good few months to try to beat that.

The most goals scored in the first 20 Premier League games by a player is Kevin Phillips’ 19 and in 30 games it is Cole’s 28.

Cole has the record of fewest games needed to score 30 Premier League goals (32) and it might be ambitious to think of it this season but Shearer and Cole took 45 games to score 40 goals.

Jamie Vardy has the record for scoring in most consecutive Premier League games with 11. Haaland is on five.

The most goals in a Premier League game is five, shared by several players including Aguero against Newcastle in 2015-16.

In the Champions League Van Nistelrooy has the record for fewest appearances to 30 goals (34) and 35 goals (42). If Haaland scores another nine goals he would break or equal those marks too.

Haaland could also close in on the Norway goalscoring record this season. He is only 12 goals off Jorgen Juve’s national record of 33 goals in the 1920s and 30s.