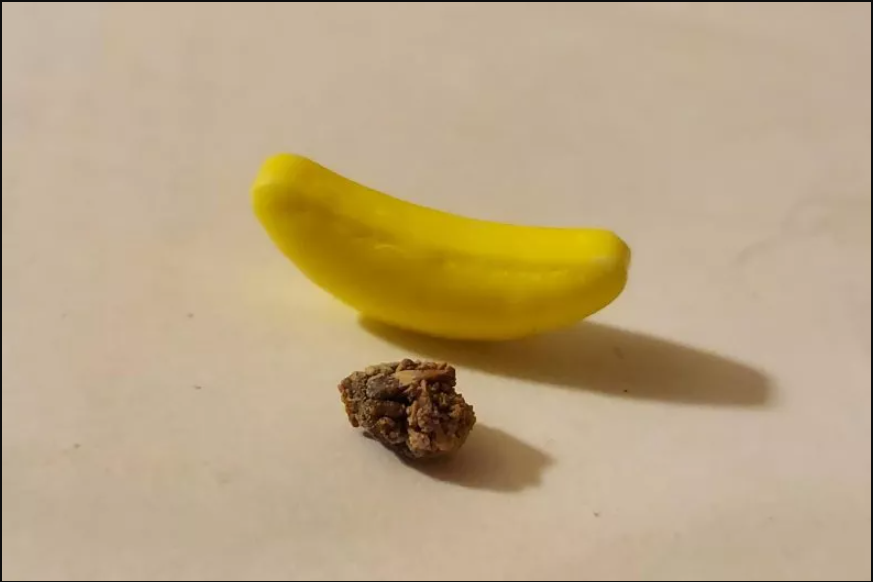 Aman has shared the picture of a kidney stone that was stuck inside his body for two months.

In a viral Reddit post that garnered over 40,000 upvotes, user Psytoxic showed the stone, which was located between the kidney and the bladder, next to a banana candy for scale, with the caption: “After two months of intermittent pain, I passed my kidney stone.”

Kidney stones are small clusters of crystals that can form in the kidneys, causing intense pain and potentially damage to them, the ureter (the tube connecting the kidneys to the bladder), and the urethra. According to National Institutes of Health’s (NIH) National Institute of Diabetes and Digestive and Kidney Diseases (NIDDK), kidney stones form when there are high levels of certain minerals in the urine. According to the Guinness World Records, the heaviest kidney stone was successfully removed in Pakistan and weighed 620 grams (nearly 22 ounces), i.e. four billiard balls.

Kidney stones form due to certain chemicals, namely calcium, oxalate, and phosphorus, crystallizing in the kidneys rather than being filtered out or dissolved in the urine. This can often be due to not drinking enough water, but the risks of developing a kidney stone may also be influenced by other medical conditions or medication. People with bowel inflammation, gout and obesity are particularly at risk, according to the NIDDK, as well as those taking diuretics, antacids containing calcium and the HIV treatment indinavir.

After forming, the kidney stone attempts to pass out in the urine, but it can get lodged in the various tubules along the way. This process can be incredibly painful, with many people who have given birth and experienced kidney stones comparing the two as similarly painful.

“Kidney stones need to pass through a narrow tube called the ureter on the way from the kidney to the bladder,” Ribeiro said. “Normally this tube is just small enough for urine to pass through but when a stone gets stuck, the tube tries to squeeze against it to remove the blockage. This squeezing, in combination with urine backing up into the kidneys, causes the pain.”

“The really painful part wasn’t when it traveled through my urethra,” Psytoxic said. “It was the two months it was stuck in my ureter.”

Kidney stones may naturally pass through the body and exit in the urine, but sometimes they get stuck and require medical intervention. Doctors can remove a kidney stone in several ways, according to the NIDDK. The least invasive includes shockwave lithotripsy, which breaks the stone up into smaller pieces, while more invasive procedures involve the doctor using a ureteroscope to look inside the urinary tract and break it up non-surgically, or even operating and removing the stone directly from the kidney.

If left untreated, a kidney stone that will not pass naturally can lead to further health complications, including kidney infections and even loss of kidney function.

8 Countries Producing Most Beautiful Muslim Women in the World