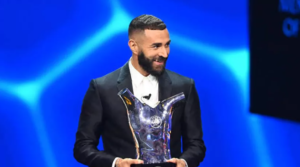 French striker Karim Benzema of reigning Champion League winners Real Madrid was named Men’s Player of the Year on Thursday at an UEFA event in the Turkish metropolis Istanbul.

Italian head coach Carlo Ancelotti, meanwhile, was named Men’s Coach of the Year for the 2021-22 season, while Barcelona midfielder Alexia Putellas won the Women’s Player of the Year award.

UEFA Europa League and Conference League group draws will be held on Friday in Istanbul.

Karim Benzema was voted UEFA Men’s Player of the Year at a gala in Istanbul ahead of Thibaut Courtois and Kevin de Bruyne.

In the finest campaign of his career, Benzema netted 44 goals in 46 games for Real Madrid. He scored 27 times in LaLiga Santander, two goals in the Supercopa de Espana and 15 times in the Champions League.

Benzema led Real Madrid all the way to the Champions League title, also netting six goals in 10 games for the French national team.

“I’m really happy. It’s the first time I’ve won this trophy but for me the most important thing is to win trophies with the team. Mr Ancelotti is the best coach in the world; he gets it right with every player, he gives us confidence and he tells you what to do before every match”, said the striker as he picked up the award.

“The French striker was named 2021/22 UEFA Champions League Player of the Season after driving Real Madrid on to a record 14th European title, and his fifth since he joined from Lyon in 2009,” reads UEFA’s website.

“His final tally of 15 goals – including a joint-record ten in the knockout stages – earned him top spot in the competition scoring charts, with 27 in the Spanish Liga also a domestic best.

“The evergreen 34-year-old started the campaign by helping France to UEFA Nations League glory and never looked back, consecutive hat-tricks in the Champions League knockout stages against Paris and Chelsea the highlights of a goal and trophy-filled season.”

Real Madrid striker Karim Benzema has won the UEFA Men’s Player of the Year award after his stellar 2021/22 season.

Club teammate Thibaut Courtois – who was named man of the match for his heroics in May’s Champions League final win over Liverpool – and Manchester City midfielder Kevin De Bruyne were named on the final shortlist. But the gong was awarded to Benzema at the draw for the 2022/23 Champions League group stage in Istanbul on Thursday.

The France international led Los Blancos to their 14th Champions League title, popping up with big goals at vital moments in knockout round ties with PSG, Chelsea and Manchester City when his team needed him most.

Forming a formidable forward partnership with the once-maligned Vinicius Junior, Benzema scored a whopping 44 goals in 46 games for Real Madrid in all competitions last season.

With UEFA’s top prize now in his possession, his sights will now be set on claiming the Ballon d’Or in October. Benzema is widely expected to become the first Frenchman since Zinedine Zidane to take home the award.

Real Madrid talisman Karim Benzema has been crowned as Uefa’s Men’s Player of the Year for his ludicrous goal-scoring exploits both domestically and in Europe over the course of last season.

The Frenchman was a worthy winner of the award for multiple reasons, including his stunning 15-goal haul across last term’s Champions League campaign. The forward played a vital role in Los Blancos’ triumphant run that saw them go all the way to lift the trophy for a stunning 14th time.

Benzema was one of three shortlisted nominees, with Santiago Bernabeu teammate Thibaut Courtois also up for the gong as well as M anchester City superstar Kevin de Bruyne.

Benzema succeeds Chelsea midfielder Jorginho, who won the Champions League with the Blues and the 2020 European Championship with Italy.