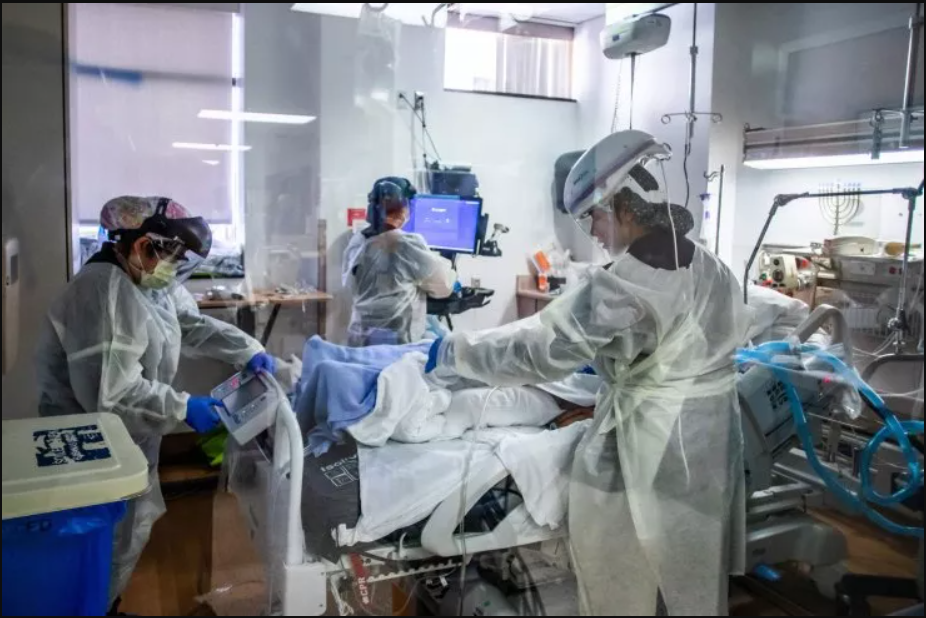 Paying the bills wasn’t supposed to be this hard.

After years as a registered nurse, Hannah Bailey, 49, signed an at-will contract with a travel nursing company that promised to pay big dollars. At first, she said it was everything she had hoped for: The $85 an hour, plus a $1,000 weekly stipend, made it possible to afford her rent in Virginia, a mortgage back home in Georgia and still have enough left over to support her ailing mother and to help her son through law school.

Then her pay was slashed.

Five weeks into her contract with Aya Healthcare, which calls itself the largest health-care staffing agency in the U.S., Bailey was told her hourly pay would be cut by more than 40%. Weeks later, her pay was cut again. It was now 60% less than she had expected. She said it was less per hour than what she was making before she had signed up to travel – with all the extra hardships and costs that traveling entailed.

“I’m just breaking even, barely,” Bailey told Newsweek, which reviewed the documents she had signed with the San Diego-based company. “Sometimes I’m in the negative – like this week … I wouldn’t have taken the job at this pay rate.”

An Aya spokesperson denied wrongdoing, saying the allegations were “demonstrably false” and that the complaint failed to note “the reality that nurses received mid-assignment pay increases at various times during the pandemic.”

Bailey is one of hundreds of traveling nurses who say their pay has been severely reduced by agencies that had initially offered them eye-popping rates, driven higher since the beginning of the COVID pandemic. At-will contracts mean employment is not guaranteed and can be terminated at any time.

Lawyers suing the companies on behalf of the nurses allege that the workers were victims of fraudulent practice by agencies that brought them in with the promise of high rates, only to pay them far less – while still profiting themselves from the hospitals where the nurses worked.

Industry leaders say the pay cuts are beyond the companies’ control and driven by changes made by the hospitals, which, in turn, note that it’s the travel agencies that hold the contracts with the nurses.

The situation has left the nurses angry and disillusioned, and has increased concerns over long-term staffing in a healthcare industry that faces chronic staff shortages amid complaints by workers that they are underpaid and overworked for the dangers they face.

“We’re hearing from nurses all over the country who just felt absolutely taken advantage of, and who felt like the rug had been pulled out from under them,” said attorney Austin Moore, who has so far filed four lawsuits on behalf of 11 traveling nurses – including Bailey – and is seeking class-action certification to make it easier for the workers to pursue the companies.

“It’s fraud because they’re knowingly participating in a bait-and-switch,” Moore, a partner with Stueve Siegel Hanson LLP in Kansas City, Missouri, told Newsweek in an exclusive interview about the litigation.

His lawsuits so far target Aya, Maxim Healthcare, NuWest Group and Cross Country Healthcare, Inc., but he said more than 100 agencies had engaged in a similar practice and that he had received documentation from nearly 450 aggrieved nurses who reported pay cuts averaging from 25% to 70%.

Bailey said she had initially signed up with Aya for $85.86 per hour plus a roughly $1,000 weekly stipend from late March to late June. Five weeks later, she was told to sign a new contract with a lower rate of $50.85 an hour. She refused to sign, but by then she had signed a lease in her new city and felt she had no other options. She kept the job. Then the rate was cut to $34.25 – below the $38 per hour she had been making at her old, non-travel nursing job (before her stipend).

Bailey was getting $1,858 less per week before taxes (before any overtime she may have worked) than when she started with Aya, according to her documents. The lawsuit estimates her total losses are at least $10,000.

“Aya’s ‘bait-and-switch’ practices are so widespread that it appears to be a core tenet of the company’s business model,” the lawsuit against Aya on behalf of Bailey, and others, alleges.

All of the suits seek recovery of lost wages for the nurses, alleging that Aya and the other companies are “knowingly engaging” in the “fraudulent” practice of hiring at one rate with plans to cut pay once a nurse relocates.

In the Aya case, the complaint goes further to allege that the company was intentionally using this strategy to “maintain the significant profit margins it had become accustomed to during the COVID-19 pandemic and to gain a competitive advantage that will allow it to become the exclusive staffing agency for more hospitals and healthcare providers.”

Aya and other providers said they couldn’t comment specifically on the litigation, or on specific employees because of privacy constraints.

Traveling nurses have long played an important role in addressing localized staffing needs in the U.S., where healthcare workers were in short supply even before the COVID pandemic led to shortages everywhere. That was when the market for traveling nurses exploded, reaching $125 an hour or more.

The median pay for a nurse in the U.S. in 2021 was $37.31 per hour – or $77,600 per year, according to the Bureau of Labor Statistics. The average rate for a travel nurse was $56 per hour with the more experienced making $82 per hour, according to NursingProcess.org, a website that provides career and educational resources to nurses.

Travel nurses often also get stipends – often $1,000 or more per week – to offset the cost of bills in two places as they work for stretches that typically last 12 to 13 weeks.

While the nurses were making headline-grabbing hourly rates during the pandemic, the hospitals were paying even higher rates to the staffing agencies that supplied them.

Newsweek obtained a “Traveler Confirmation Form” from one California hospital, which shows the facility paid $182 per hour to Aya for the services of Lauren Miller, 33, during a contract from mid-May to mid-August this year. At the time, Miller was being paid $58.50 per hour, but then Aya told her in an email it was being cut to $48.25 per hour – a 17% cut. Miller is now considering joining the lawsuit against Aya.

Miller said that hospital officials informed her that they were not responsible for Miller’s pay cut and said they hadn’t lowered the rate they were paying to Aya.

Aya, meanwhile, continued to post an identical opening for an additional nurse at the same hospital – but listed at the higher pay rate, according to screenshots Miller took from Aya’s website. The ad with the higher rate stayed up for weeks, she said.

“It feels like I’m being preyed upon,” Miller said.

The company’s website notes that it was named to Fortune’s list of Best Workplaces in Healthcare this year for the third year in a row.

Blame Game
The industry’s trade group said hospitals demanded that travel nursing companies lower their rates as COVID-19 subsided this spring and as they were no longer getting government subsidies to help cope with the pandemic. The CARES Act and other legislation had provided $178 billion for hospitals to offset COVID-related costs starting in March 2020, but Congress allowed the CARES Act to sunset in March.

“When bill rates decline, staffing agency revenues decline and the agency must make proportionate reductions in its costs, including labor (the largest share of costs) to maintain profitability,” said Toby Malara, vice president of government relations for the American Staffing Association, the trade association for travel nursing and other staffing companies.

Mindy Hatton, general counsel for the American Hospital Association, said pricing for travel nurses had been exorbitant during the pandemic and that the organization is asking the federal government to investigate the staffing agencies.

“Travel nurse staffing agencies have taken advantage of hospitals and health systems during the pandemic by inflating prices to unsustainable levels, a significant proportion of which is not passed on to the nursing and other staff,” Hatton said in a statement.

Moore’s hopes have also been raised by a bill signed by President Joe Biden in March that holds that arbitration clauses would be nullified in cases of sexual harassment and assault. He believes it is a positive signal from Congress that arbitration clauses can be changed in some circumstances and that might one day include for employment practices such as these pay reductions.

Bailey believes that hospitals and patients will be big losers from the pay cuts, with nurses discouraged by the “slap in the face” even after everything they had done during the pandemic, including being the ones who went into patients’ rooms while doctors communicated from being computer screens and iPads.

“It’s taken its mental toll on us seeing six to 10 people die a day,” Bailey said.

“For my life, it (the pay rate) was a huge difference,” she said. “For my son’s life, my mother’s life. These are things that people don’t understand. People assume that travel nurses are getting rich but we’re not – we’re trying to get the money that we’re worth.”