BANDITROOMQUALITY MAGAZINE WITH VARIOUS CONTENT
HomeNEWSWhat happens next with Jimmy Garoppolo? Here are the 5 most likely...
NEWSSPORTS

What happens next with Jimmy Garoppolo? Here are the 5 most likely scenarios 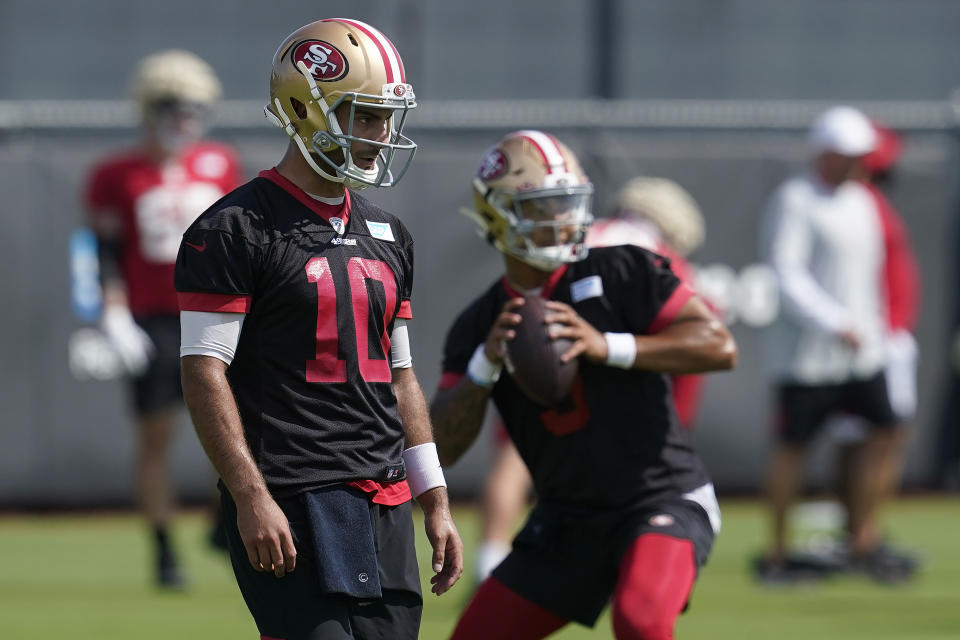 When the offseason started, a Jimmy Garoppolo trade seemed inevitable. Then the quarterback musical chairs game ended, and Garoppolo was the only one left standing.

The San Francisco 49ers said Tuesday they’ve moved on to Trey Lance as their starter, which wasn’t a shock. But it doesn’t answer what will happen to Garoppolo, who is on the roster without any other team in obvious need of a quarterback. There are no trade partners at the moment. Teams moved on to other options as Garoppolo recovered from offseason shoulder surgery.

This is a really odd situation. Here are five possible endgames for the Jimmy G story, from least to most likely:

But let’s put out a scenario that’s not too crazy. What if the 49ers can’t trade Garoppolo right away (again, there are no obvious trade partners), Lance struggles through the preseason, then the 49ers are 1-3 or worse after four games with Lance not playing as well as hoped? The 49ers do face the Denver Broncos and Los Angeles Rams in their first four games.

The 49ers are 31-14 in Garoppolo’s starts. They made one Super Bowl and almost made another last season with him starting. Do we really, truly believe that if Garoppolo is still on the roster, Kyle Shanahan wouldn’t at least be tempted to turn back to him if the 49ers are on a losing skid? Maybe he would get overruled by ownership because the team has invested so much into Lance. But in that specific situation, it’s hard to believe he wouldn’t have that thought in his head.

The 49ers do not want to cut Garoppolo. They’ve carried his cap hit of $26.95 million the entire offseason in hopes of a trade. If he’s still on the roster in late September or October and Lance is struggling, the question will be asked.

4. A surprise trade partner
When the Carolina Panthers traded for Baker Mayfield, it eliminated what seemed to be the last reasonable trade partner for the 49ers. We might believe that Garoppolo is far better than Marcus Mariota, Drew Lock, Mitchell Trubisky or other low-end starters, but those teams made their decisions months ago. They have their QB, for better or worse.

Perhaps there’s a team out there that was waiting on Garoppolo to get healthy and the price to go down. It took a while for the Panthers to trade for Mayfield, after all. Maybe a team like the Seattle Seahawks will watch Lock and Geno Smith in camp and ask their desperate division rival about Garoppolo. Or maybe there’s a team totally off the radar who will make a move. No team is an obvious fit at the moment, but perhaps we’re overlooking someone.

3. Browns reconsider starting Jacoby Brissett
The Browns said on Wednesday that Brissett would replace Deshaun Watson if Watson is suspended, which is even less surprising than the 49ers’ “Lance will start this season” revelation. But it’s not like the Browns can call out Garoppolo by name. He’s on another team’s roster.

If Watson gets a full year suspension, the Browns have a decision to make: Go forward with Brissett, who is better suited as a backup, or make a move for Garoppolo. Garoppolo wouldn’t be cheap, but he’s clearly the better quarterback than Brissett. The Browns’ chances of making the playoffs dip significantly if Brissett is their 17-game starter. It’s a fit, at least.

2. 49ers cut Garoppolo
It would be a hard move to make, knowing the 49ers could have used Garoppolo’s cap space of nearly $27 million to improve the roster in free agency through the offseason. We all know why the 49ers didn’t cut him early in the offseason. But it hasn’t worked out as hoped.

The reason the 49ers would cut Garoppolo would be threefold: They’d be giving him a chance to sign elsewhere, they would get about $24 million in cap space (Deebo Samuel extension, hello) and Lance would never have to worry about the Garoppolo possibility again. It would stink for the 49ers for that to be how it ends, but at some point it makes more sense than hoping something else develops.

1. A contender loses its QB
In 2016, the Minnesota Vikings lost Teddy Bridgewater to a freak injury right before the season. They panicked and made a bad trade, sending two picks including a first-rounder to the Philadelphia Eagles for Sam Bradford. That didn’t work out. But teams don’t want to punt a season when they believe they can make the playoffs, and that can cloud their judgment.

While it’s not guaranteed a contender loses its QB to a long-term injury before the trade deadline, it is the best possible outcome for the 49ers. They’d finally get something in return for Garoppolo, have him off the roster and get back at least some of that cap space they’ve been wasting.

Nobody roots for injuries. Unless you’re the 49ers praying to trade Garoppolo before the deadline.